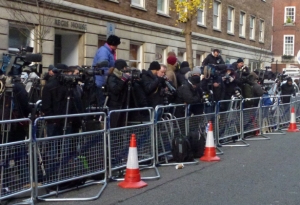 So, the world has officially gone royal baby mad.  Poor Kate is only a few weeks’ pregnant, yet there are already enough column inches devoted to her not-even-visible-yet bump to stretch round the world and back again.  As I saw someone observe on Twitter today, if you thought the Daily Mail’s coverage of Suri Cruise was excessive, wait until you see what they’ve got planned for this little one.

In my line of work I receive a fair few press releases on a daily basis – and today’s collection really did plumb the depths.  Everyone seemed to want to jump on the back of the royal couple’s news with a tenuous reaction, often linked to shamelessly promoting some kind of product or another.  No sooner had Kate’s pregnancy been announced than Paddy Power was sending out details of what they reckoned the future heir would be called.  Apparently, John, Charles and George are the favourites for a boy, but a girl’s bound to be called Mary or Victoria.  And remarkably, they’re offering evens when it comes to whether or not it will be a boy or a girl.  Funny, that.

TV and radio networks across the globe have gone into overdrive about the news, too: outside the hospital where Kate is being treated, there are now crews from Australia, America and most European countries, many of which ran this as their lead story for much of yesterday.  24-hour news channels in the UK, meanwhile, faced that dilemma of having to cover a story that isn’t really a story, once you’ve got beyond the fact that a woman is pregnant.  Cue all sorts of royal biographers and other hangers-on, paid to witter on about whether it’ll be twins, or what Charles probably thinks of it all, or what the doctors will be doing right now, or whatever.

Amidst all the chaos and attention, how will the parents of our future king or queen be feeling tonight?  Discovering you’re going to become a mum or dad for the first time is a daunting experience for mere mortals like you and me, so goodness knows what it must be like when your first trimester happens in the glare of the media spotlight.  Back in 2007, I remember going to Boots with my wife to buy a pregnancy test kit (we could have got one from Sainsbury’s – it was much closer to our flat – but there’s something quite comforting and reassuring about buying that sort of thing from Boots.  Or is that just me?).  Anyway, I couldn’t understand why they were on a ‘Buy One Get One Free’ offer.  Surely, I thought, it’s not the kind of accessory you need twice in quick succession – unless you have the gestation period of a gnat.  And then I realised: seeing the blue line once is never enough.  You simply HAVE to do another test, just to make sure that the enormity of what that little white stick is telling you really is true.

So, back to those royals.  Understandably, all the media attention is on Kate this week – but what about William?  He might well be entirely used to the photographers and the protocol, but he won’t be any more prepared than you or me when it comes to how to be a dad.  There’ll no doubt be a whole host of doctors, nannies and advisors around him, all of whom are bound to cost a fortune.  But will that really increase his chances of always reacting calmly when his toddler throws their food on the floor AGAIN?  Will being second in line to the throne make it easier for him to not have a row with his wife when they’ve both been up all night?  And will his child always behave politely with his great granny, especially given that she’s really rather important?  No chance.

I hope everything works out okay for them.  It’s still far too early for the world to know she’s pregnant.  I also hope that when the baby is born next May, they give it a really random name (Princess Shaznay?  Prince Dean?), if only to cause outrage in the Daily Mail – and to make me a fortune at Paddy Power.